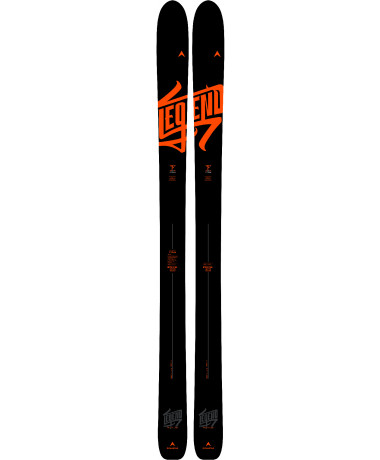 It has been said that true legends never die. In the case of the PRO RIDER this myth becomes reality as one of the most sought after skis of all time is resurrected in all of its glory, much to the delight of hard chargers the world over. A dominant presence on competitive freeride podiums for over a decade, the PRO RIDER is the athlete-developed, Factory Team-approved, competition freeride ski for the most aggressive skiers on the mountain. Featuring moderate Early Rise tip rocker and 3D poplar wood core construction with two layers of titanal and full-length vertical sidewalls, the PRO RIDER is a powerful, no-frills, fall line seeking missile. It has been described by some as a 105mm waisted race-stock GS ski. Although this sounds like a harsh, demanding ride, like a well kept whisper between a secret brotherhood, the already initiated share knowing glances in lift lines alluding to the understanding of the PRO RIDERS true nature.  It will reward an able pilot with a smooth suppleness, deeply flexing into a gentle, predictable rhythm reminiscent of a champion thoroughbred breezing down the homestretch. It is as if the skis core is animated with some kind of supernatural sentience.  This ski has a soul, and apparently it's eternal.